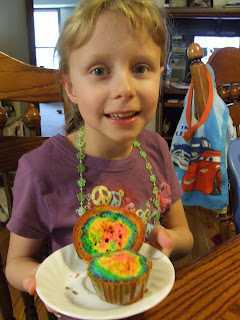 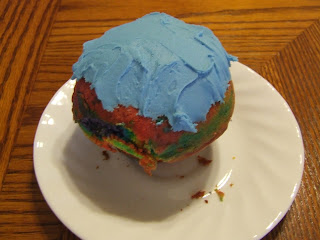 As a subscriber to Family Fun magazine, I see lots of fun recipes and projects in each monthly issue. March didn't disappoint with this recipe for rainbow cupcakes. I had some icing in the fridge that was already tinted blue, so we used that instead of white. I have no idea why they turned out to be in concentric circles but tie-dyed on the outside. A friend made them and hers are perfect on the outside and all crazy on the inside. One tip before you try this for yourself: it takes a LONG time to spoon in each layer of color. I would suggest either only using 1/2 of your batter for cupcakes and the other half for a small cake - as suggested to me by Cupcake Nana. You could also buy a Jiffy brand cupcake mix as it makes only a dozen cupcakes.
Posted by Cupcake Mama at 7:00 AM