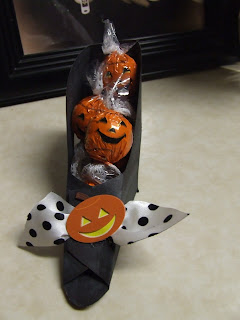 ****WARNING**** Don't click on my photos to enlarge them! My poor magic marker coloring really shows up. Also, I did remove the big glob of glue off the toe after I took the pictures!

I saw this fun idea on a totally cute blog and had to try making one for Miss M's teacher. I was out of black card stock but refused to go to the hobby store because it has been raining buckets at my house today. I improvised and used a black magic marker on gray card stock. Also, I could have purchased some themed ribbon and probably some charms, but I used what I had! Other than getting a little high on the fumes, I think it turned out pretty good for a first attempt. I didn't make the liner either - just lazy I guess! 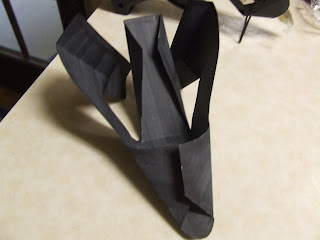 Next time though, I think I will try using glue dots - less drippy that way while you are waiting for it to dry - hence the baby clothespins. 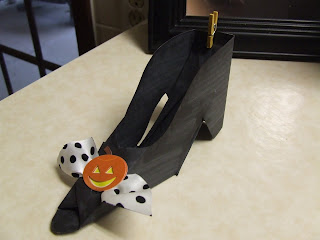 Also, my pictures don't show the cute little tag that a bushel and a peck added. I took her suggestion and it just ups the cuteness factor by about 50%. It says:
Trick or Treat
Witches Feet
Mrs. XXXXX can't be beat!
Happy Halloween!
If you like this idea, be sure to go here for a shoe template. Not sure who the original idea came from, but it really is precious and could easily be adapted for other themes. It would make a great favor for a princess party, don't you think?